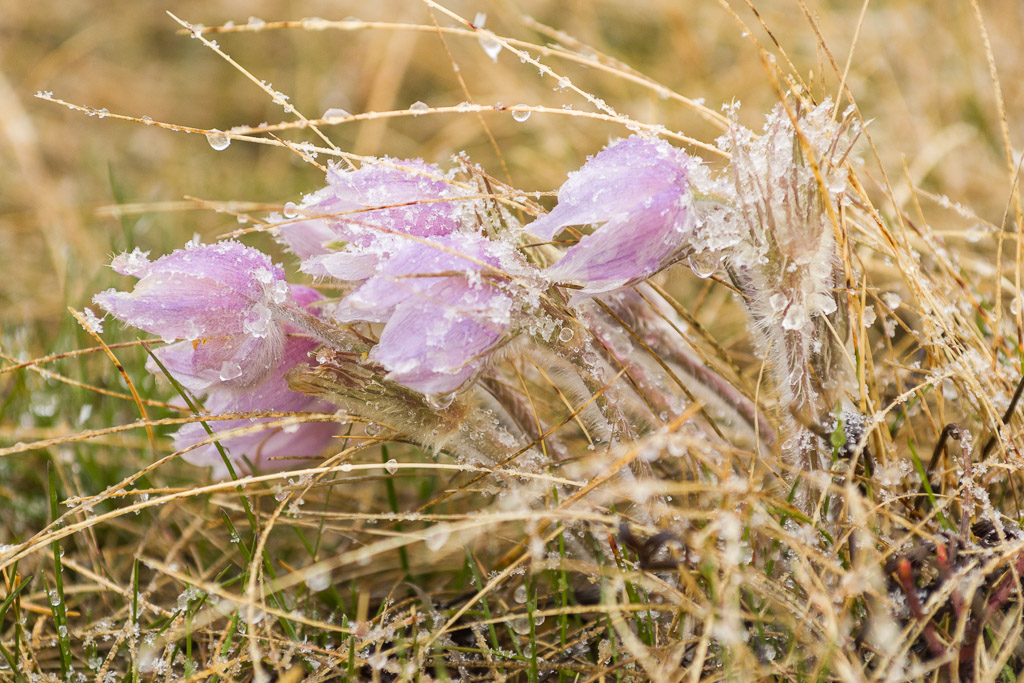 At the beginning of April the prairie crocuses (Anemone patens) began to emerge on the grassy slopes of the natural park near my home (in fact, the day after one of many big spring snowstorms). We are about a month behind our European cousins, who have been enjoying snowdrops (Galanthus nivalis) since the beginning of March and where true crocuses (Crocus) are basically now done blooming. The prairie crocuses are about three weeks later this year than last. Spring is also quite late. (I’m writing this on April 25, and though the grass has started to green… it is snowing again.)

I’ve been going out every day to photography these violet-coloured, furry, miniature parabolic sun-tracking antennae. Inadvertently, each time I’ve gone out, I’ve taken a different lens mounted on my Canon EOS M5. Though I am primarily a wide-angle photographer, I like to experiment and enjoy working with a range of unique lenses.

I thought I would put together a little gallery of prairie crocus photographs taken with various lenses to show that you can shoot close-ups and macros1 with just about any lens.

This isn’t meant to be a full macro tutorial, but a few definitions might help so we are speaking the same language.

The magnification is expressed in terms of the sensor format for which the lens is designed. When using full-frame lenses on a smaller sensor camera the magnification capability is increased by the crop factor. For example, a 0.5x capable full frame lens will have a maximum magnification of 0.8x on APS-C (0.5×1.6=0.8). Yeah!

The minimum distance from the subject to the sensor plane. For zoom lenses, the minimum focusing distance can vary by focal length.

The distance from the front of the lens (without hood attached) to the subject.

With a smaller focal length lens the working distance is usually smaller, making lighting of the subject more difficult and increasing the potential to scare away moving subjects (e.g., bugs).

For interchangeable lens cameras (ILCs), the distance from the front surface of the lens mount to the film/sensor plane.

The distance from the camera lens mount surface to the front of the lens (without hood attached).

Macro lenses usually have a fairly fast wide aperture (f/2.8 of less), to compensate for the loss of light (reduction in the effective aperture) as the lens focuses on closer subjects. Remember, f-stop is a ratio of the aperture diameter to the focal length. As you focus closer, the lens mechanism effectively increases in focal length, reducing the f-stop ratio, and reducing the amount of light reaching the sensor — perhaps 2 stops at 1:1 magnification. Thus if you used an incident meter to measure scene brightness, and set your camera exposure accordingly, your image would be underexposed when shot close-up.

The flat surface of the digital sensor or film. On many cameras the location of the sensor plane is indicated on the exterior of the camera with a small circle bisected by a horizontal line: Φ. Focusing distance is measured from the film plane, not the front of the lens.

The difference between the size of a full frame sensor compared to a smaller sensor. For Canon APS-C this is 36mm (full-frame sensor width) divided by 22.2mm (APS-C sensor width) which equals approximately 1.6 crop factor.

Lenses that expand space and capture a wide field of view.

I’ve always been a wide-angle photographer. A few years ago, when I got my EF-M 11-22mm I was really keen on attempting wide-angle macros or environmental close-ups. Similar to environmental portraits, where a person is shown in an environment for context, I wanted to showcase the surroundings in my macros and close-ups to give viewers a better sense of the environment in which the subject exists.

I’ll start with the widest lens in my arsenal, though it is not the first, second, or even third, lens I used to photograph the prairie crocuses. It does have an amazing minimum focusing distance though, and the ultra-wide angle makes it easy to include background elements in the frame.

I love how compact and wide this lens is. It reminds me of shooting with my original 16-35mm on my old film bodies (I’ve have yet to own a full frame DSLR — yet). However, at 2x zoom it doesn’t cover a lot of range. It’s great as a specialized landscape lens, or for shooting interiors though.

The 16-35mm f/4 is my most recent lens purchase, my favourite lens at the moment, and replaces my venerable but old Canon EF 16-35mm f/2.8L USM. For me, it is a very versatile lens, shooting indoors and outdoors, landscapes and my fast and crazy toddler, all equally well.

The best camera is the one you have with you, is the common saying. The iPhone 6s is a 29mm equivalent fixed f/2.2 camera with a minimum focus distance of about 3.5 inches. As a relatively large aperture lens you might think the iPhone would give decent background blur, but it is also a wide lens so depth of field is always quite large. And, being a fixed aperture, you can’t stop down either to increase depth of field, so your creative potential is limited. You can add close-up lens attachments (I’ve owned Olloclip lenses in the past), but I find these to be cumbersome unless the iPhone is truly the only camera you own.

The other downside of the iPhone is the built-in camera app and the fact that it only saves JPEGs. Low-light performance is also limited. I advocate shooting RAW if you plan to do any post-processing of your photos and (for serious photos) have started using the Lightroom Mobile app camera which saves DNG files, has a very nice looking HDR function, and syncs automatically with Lightroom CC on my desktop computer.

Lenses that approximate the angle of view of human vision.

I originally owned the Edge 80 optic element for this lens (and still do), but 80mm is a little long for anything other than portraiture for me. I recently ordered the Edge 50 optic and this was really the first opportunity to test out its capabilities. It is not as wide as I am used to, but compresses space nicely, and has a nice effect when combined with the Composer Pro’s tilt functionality (either decreasing or increasing the zone of focus). Both the Edge 80 and Edge 50 have a close-up function (essentially a built-in extension feature), that, in the case of the Edge 50, allows a minimum focusing distance of 8″.

I’m including this lens in the normal section, despite the fact that on APS-C it has an equivalent focal length of 160mm, because it is one of the standard macro lens focal lengths available. 50mm and 60mm macro lenses are also common, but I find their minimum working distance too restrictive for dedicated macro use. 100mm creates better subject isolation too.

Lenses that compress space and capture a narrow field of view.

A good compact APS-C telephoto with excellent reach, the longest EF-M native lens is limited for macro/close-up use by a rather large one metre minimum focusing distance. If I am going out shooting and want to have a tiny telephoto zoom in my bag, just-in-case, I take this lens along. I often have my extension tubes along too, in case I want to shoot some true macros.

This lens, released in 1989, is my oldest surviving Canon EF lens. It is an internal-zoom fixed-aperture L-series lens with excellent glass, but it is slow focusing compared to USM replacements and has a very long minimum focusing distance of 1.8 metres. I haven’t used it for a long time, but have been carrying it around lately. This is a case where having extra sensor resolution is handy so you can crop tighter in post-processing if necessary. With a few extension tubes though I can shorten the MFD to about quarter of a metre and get really nice macros and close-ups. With no full-time manual focus override it is a bit of a pain to switch between manual and auto-focus (the switch is very stiff).

I bought this lens thinking that I would only be using it to bring distant subjects (e.g., landscapes, wildlife) closer, but have discovered that it is great for magnifying even close-up objects. The minimum focusing distance of 2.2m sounds quite far away, but zoomed to 600mm, and with a working distance of almost 1.9m, I can fill the frame of my EOS M5 with an average sized butterfly, or zoom in on the head of a very skittish garter snake. Never underestimate the value of a large working distance when photographing close-ups of certain subjects.

You don’t need a dedicated macro lens to create casual or even serious macro photos or close-ups. As noted in some of the above descriptions you can increase magnification in several ways:

I occasionally use extensions tubes, however, to my recollection, the above photos were all shot without such accessories (prairie crocuses are not that tiny after all).

I believe that macro photographs are like any other type of photograph — technique is not as important as subject matter. Macros of tiny things can be amazing for the view they give us into what seems like another world, but really great macros also tell a story.

I enjoy shooting the occasional macro photo (among the many other types of photography that I enjoy), but some people are really dedicated and fantastic macro shooters. Go look at their work on sites like Flickr and then go out and try some macro photography yourself.